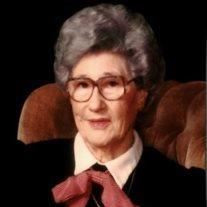 Ann Gibson, August 29, 1915-September 7, 2014: She picked one last rose of summer, clasped it to her, thorns and all, and walked confidently into the Great Mystery. Service: 11:00am Friday, September 12 at Keller United Methodist Church. Burial: Grove Hill Memorial Park, Dallas. Visitation: 5-7pm Thursday at Lucas Funeral Home, Keller. Born in Dallas to Carl and Anna Pearl Fine Hartman, she had five brothers all of whom preceded her in death. She attended North Side High School but spent most of her youth in Cleburne where she met and later married Dave Gibson in 1935 and where their only child was born. The family moved to Jacksboro where he worked for the Safeway Store, first as a butcher and later as store manager. Ann went to work in an insurance agency in order to pay for her daughter’s education at TCU and where she later also attended getting her insurance training in night school. After twenty years the couple left Jacksboro, moving to Keller where Dave bought two small grocery stores and built Gibson’s Super Market. In 1964, a time when women could not sign their own checks, borrow money, or own property in their own names, Ann opened her own insurance agency and incorporated it in her name. Through the years she developed a loyal customer base and had contracts with important names in the industry, winning awards from many. Locally she was awarded Life Time Achievement from the Keller Chamber of Commerce. Ann Gibson was an independent business woman in a man’s world and yet always remained a lady, overcame every obstacle, and had an excellent work ethic. Her family, though, remained her central focus and she managed to balance her life. None ever hungered or thirsted in her presence. Until 2011, Ann went to her office every day and still cooked Thanksgiving, Christmas, Mother’s Day and Easter feasts. She also was an avid Cowboy fan knowing the strengths and weaknesses of the team, rejoicing in victory and agonizing over every defeat. Dale Hansen, sports announcer, whose insurance she wrote for several years, was her hero even when the Cowboys weren’t. When asked her secret of a long life she responded that, like Popeye, she ate her spinach and had good health habits, but mostly had a strong constitution. When life ended, she met with assurance and confidence what lay beyond knowing. She will be cherished in memory and sorely missed by her daughter, Joyce, granddaughter Delight Justice and son-in-law, Brooke, and sons, Cole and Austin and grandson Darrell Roach, daughter-in-law Connie, and her grandchildren, Trey and Hollyann. She was preceded in death by her husband, Dave Gibson, in 1996. In lieu of flowers donations may be made to: Keller Fire and Rescue - 817-743-4400 The Salvation Army - 1-800-SAL-ARMY (725-2769) DVD Tribute will be added soon, please check our website in the near future for an update.

Ann Gibson, August 29, 1915-September 7, 2014: She picked one last rose of summer, clasped it to her, thorns and all, and walked confidently into the Great Mystery. Service: 11:00am Friday, September 12 at Keller United Methodist Church. Burial:... View Obituary & Service Information

The family of Anna (Ann) Pearl Gibson created this Life Tributes page to make it easy to share your memories.

Send flowers to the Gibson family.