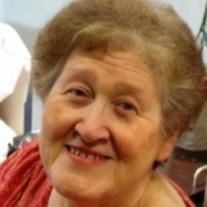 NORTH RICHLAND HILLS -- Berneice Irene (Evers) Karner, 80, beloved wife, mother, grandmother, and sister passed away around 12:30 pm on November 26, 2014 in Fort Worth, Texas. After years of courageously battling multiple health issues and experiencing a escalating decline, God whispered Berneice's name and called her into her heavenly home in the presence of her Lord and Savior, Jesus Christ. A celebration-of-life service for Berneice will be held at 2:00 pm Monday, December 1, 2014 at Good Shepherd Lutheran Church in Midwest City, Oklahoma with Rev. Glenn Huebel officiating. A viewing will take place from 1:00 pm to 3:00 pm on Sunday, November 30, 2014 at Lucas Funeral Home, Hurst. Texas. Interment will follow at Arlington Memory Gardens in Midwest City, Oklahoma. A memorial service will be held at a later date at Messiah Lutheran Church in Keller, Texas. Paramount to Berneice was her devout Christian faith. She received the gift of holy baptism, becoming a child of God on December 9, 1934. She confessed her baptismal faith in the rite of confirmation on April 4, 1948 and was admitted to the altar to receive the holy sacrament of Christ's redeeming body and blood. Berneice was a charter member of two congregations: Faith Lutheran Church (1977) in Altus, Oklahoma and Messiah Lutheran Church (1981) in Keller, Texas. Berneice, always, looked forward to worshipping her Lord with her church family on Sunday mornings. Berneice was the fifth of seven children born to Emil and Katherine (Schmunk) Evers on Wednesday, November 21, 1934, on the family farm northwest of Garber, Oklahoma. As a young girl Berneice enjoyed attending her one-room schoolhouse, Home Valley district 28, and later transferred to the Garber Public School system. After graduating from Garber High School in 1952, Berneice moved to Oklahoma City where she was later gainfully employed in a clerical position by McKesson & Robbins pharmaceutical supply company. Berneice enjoyed attending church-sponsored Walther League functions for young adults. It was at such an event that she met her future husband, Harold Karner. Harold and Berneice's first date was intended to be a visit to the Oklahoma State Fair, but after an unexpected and extended cloud burst, they decided to go to movie instead. Harold and Berneice were married on Sunday, March 3, 1957, at Zion Lutheran Church in downtown Oklahoma City, Oklahoma. To this union three children were born: twin daughters, Charlene and Marlene, and a son, Myron. Berneice had a passion for life which could be summed up by her intense devotion to God, family, and country. Berneice's life exemplified the fruits of the spirit found in Galatians 5:22—love, joy, peace, long-suffering, gentleness, goodness, faith. She was the heart of the home, a very loving wife and mother. Berneice was known for her gentle countenance, her listening ear, her genuine concern and welcoming hospitality. It was indeed important to Berneice to send cards to family and friends marking special occasions and even in her last stages of critical illness lamented that she was unable to do this. Holidays were special times for Berneice and Thanksgiving was one of her favorites. Berneice not only delighted in the opportunity to prepare and serve food for loved ones, but she took it as a time to reflect and give thanks for the many blessings bestowed upon her by God. Berneice loved to travel and was an avid reader. She was a wonderful cook and expert baker, knowing the art of tweaking a recipe for the best results. Berneice was fond of gardening and especially looked forward to the cooler season when she could plant her beloved favorite flower—the pansy. She enjoyed their face-like appearance, bright vivid colors (especially the purple ones, purple being her favorite color), and their stamina to endure light freezes. Berneice was skilled in a variety of games and not only enjoyed playing (and winning which she frequently did) but relished the opportunity to connect with family and friends in convivial conversation. While bedridden during her final years, Berneice especially looked forward to regular visits from family friend, Bob Knipp, who could always get a smile out of her no matter what the circumstance. Berneice was preceded in death by her parents, Emil and Katherine Evers; brother, George Evers; and sister, Dorothy “Dottie” Masterson. Those left to cherish her memory are husband Harold; daughter, Marlene (Rodney) Johnson of Lahoma, Oklahoma; daughter Charlene (Roger) Johnson of Lahoma, Oklahoma; son Myron (Joanna) Karner of Houston, Texas; granddaughter Monica Johnson of Edmond, Oklahoma, daughter of Rodney and Marlene; sister, Lorlene “Pat” Patterson of Fort Worth, Texas; three brothers: Harold Evers of Enid Oklahoma, Lloyd Evers of Honolulu, Hawaii, and Paul (Sherry) Evers of Broken Arrow, Oklahoma; and a host of nieces, nephews, and friends. In lieu of flowers, memorials may be made to the Berneice Karner Memorial Fund at Messiah Lutheran Church, Keller, Texas

The family of Berneice Karner created this Life Tributes page to make it easy to share your memories.

Send flowers to the Karner family.