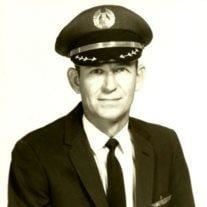 Bill Floyd, 81, passed away peacefully, Friday, Aug. 29, 2014, at his home surrounded by his loving family. Funeral: 1:30 p.m. Tuesday at First United Methodist Church of Hurst, 521 W. Pipeline Road, Hurst. Visitation: The family will receive friends 2 to 4 p.m. Monday at Lucas Funeral Home in Hurst. Billy Leon "Bill" Floyd was born Nov. 29, 1932, in Webb (Riverview), Okla., to Coral Ada Rambo and Joe Perry Floyd. Bill grew up on a farm, attended a one-room schoolhouse for the first eight years of his education. He then attended the Camargo High School, graduating in 1952. Bill loved and played sports and baseball was his favorite. Bill married Marilyn Day from Camargo, Jan. 25, 1957. Robin Edward was born Sept. 24. 1959. Tommy Joe was born May 20, 1967. Bill and Marilyn spent the first 20 years of their lives in the Dallas area and living in Houston for two years before moving back to Oklahoma. They lived in Elk City, Okla., for 30 years. Due to ill health they moved back to Dallas-Fort Worth area to be closer to their son, Tom Floyd, and his family in 2011. While growing up, whenever he was in the field on the farm or wherever if he heard an airplane, he immediately stopped what he was doing and watch the plane until it disappeared. Therefore, that was the beginning of his career. After graduating from high school, he took a course to be an airplane mechanic at Oklahoma A&M at Stillwater now known as OSU. From there he worked at Spartan Aviation in Tulsa, Okla., then Page Aircraft in Yukon, Okla. And then he started his career as a mechanic for Trans-Texas Airways in Dallas, where he became a pilot, flying for the airlines for 26 years. Trans-Texas became Texas International, later buying Continental Airlines, keeping the Continental name. He retired in 1992 after flying for 58 years, flying a total of 22,000 hours. Bill enjoyed flying. He started out as an instructor and continued instructing his entire life. He taught his two boys to fly. He loved to help and instruct friends or whomever. Pilots continued to ask him for advice. Bill was preceded in passing by his parents and brothers, R.E. Floyd and Joe Mac Floyd. Survivors: His wife of 57 years, Marilyn Day Floyd; sons, Robin Floyd and wife, Tresa, of Walla Walla, Wash., and Tom Floyd and wife, Lisa, of Colleyville; grandchildren, Jessica and Justin Hoffman of Walla Walla, Jennifer Floyd of Gig Harbor, Wash., Lindsey Floyd of Portland, Ore., Billy Floyd of Walla Walla and Joseph and Katie Floyd of Colleyville; great-grandchildren, Liam Hoffman and Emmett Floyd; and sister, Geraldine Martin. In lieu of flowers, the family asks that donations in Bill's name be made to Angel Flight South Central at: www.angelflightsc.org

The family of Bill Floyd created this Life Tributes page to make it easy to share your memories.

Send flowers to the Floyd family.