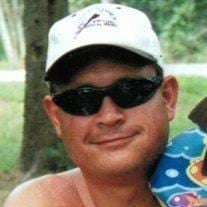 Charlie Shuler Bruce III, 47, passed away on February 6, 2014 after surviving with ALS (Lou Gehrig’s disease) for over a decade. Service: 2:00p on Monday February 10 at Lucas Funeral Home, 137 E Hill St, Keller TX 76248. Visitation will be from 2:00-4:00p Sunday afternoon at the funeral home. Come comfortably dressed and ready to reminisce. Memorials: In lieu of flowers, donations can be made to MDA in his honor. Charlie’s story began in Brownwood, Texas on December 19, 1966. During his young years, he mostly enjoyed streaking in front of the TV (something he likely practiced into his college years). His family quickly moved to and around Fort Worth, and he attended Lake Worth for most of his school years. There, Charlie helped lead the Bullfrogs to a 3A state title game in baseball, just shy of winning the championship. He graduated from the University of North Texas in 1993, and finished his career in advertising sales. Charlie is fondly remembered as a devoted father, hilarious prankster, quick-witted jokester, self-proclaimed master of all things fishing, and an avid Emeril watching chef. His family wants to send thanks to the nurses and staff at Maxim Healthcare, the compassionate Dr. Joseph Viroslav, and his lifelong friends, all of whom helped Charlie down a very rough path of illness. He leaves behind his son, Charlie Bruce IV, and daughter, Evie Bruce. He is also survived by his mother, Rose H. Berntsen, three brothers, Lyle Covington, Keith Covington and Beau Bruce, as well as two sisters, Brenda Covington and Mona Powers Service provided by Lucas Funeral Home in Keller, Texas.

The family of Charlie S Bruce created this Life Tributes page to make it easy to share your memories.

Send flowers to the Bruce family.