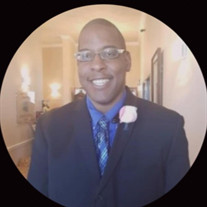 Christofer Gibson Herbert was born the second of three children born to Christine and the late Byron Herbert on June 5, 1976 at Hotel Dieu Hospital in New Orleans, Louisiana. Chris’ education started at Jefferson Height Jr Academy and graduating from Alfred Bonnabel High School. Chris also attended several different schools of higher education (Oakwood College, Louisiana State University, & University of Phoenix.) Chris worked for numerous jobs until finding his calling in Cloud Computing, where he worked directly with the project manager of the Dallas Cowboys. Chris had a good childhood. He enjoyed time with his brother, sister, and cousin Shauwnn, who is just like a brother. Family trips to Miami & Huntsville were memorable. Chris had a great love of learning. As a child, he would often get into trouble for being in the room reading when he should have been doing his chores. Chris was a faithful member of the Who Dat nation (New Orleans Saints), loved watching Doctor Who with his brother and having meaningful discussions with his sister. Like thousands of Louisianans in 2005, Chris was affected by Hurricane Katrina. When he was unable to return home to Kenner, an opportunity to relocate to Houston, TX arose. While there, the wheels went into motion and he met the love of his life, Sherrenise. The two were wed on February 1, 2010 in Cleburne, Texas. From that union, a son was conceived, Cameron Christofer Herbert. Chris’ faith was an important tenant of his life. He enjoyed attending church, having religious discussions with others, and working with the Pathfinders. He strived to provide his children the same Christian education that he received from his parents. Chris went to sleep in the Lord on August 27, 2021. He was preceded in death by his father: Byron Herbert, Sr.; Grandparents: John Earl, Sr. & Lenora Herbert and Ace & Myrtle Gibson; Aunts: Gail Gibson, Loyce Gibson, Pamela H. Johnson, and Arlene H. Camile; Uncles: John E. “Yon” Herbert, Jr. and Harold Gibson. Chris is survived by his wife, Sherrenise; daughter: Nina Dixon; sons: Jayden Dixon and Cameron Herbert; his mother: Christine Herbert; brothers: Byron II (Sherlita) of Columbia, MD and Shauwnn Johnson (Barbara) Atlanta, GA; sister: Rozier Herbert Perry (Courtney) of Bossier City, LA; Uncle: Kenneth Herbert (Veronica) of Birmingham, AL; and a host of cousins, nieces, nephews, and friends.

The family of Christofer Gibson Herbert created this Life Tributes page to make it easy to share your memories.

Christofer Gibson Herbert was born the second of three children...

Send flowers to the Herbert family.