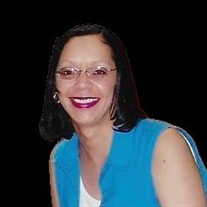 Debra Yvette “Sugar” Wilson, 62, of Joshua, Texas, returned peacefully to her heavenly home on May 10, 2021 after a valiant battle with an illness. Debra will be forever and lovingly remembered by her best friend and husband of 18 years, Larry Wilson. She was born on March 26, 1959 in Flint, Michigan to the late Johnnie Lee Cole and Gladys Geraldine Gordon. Debra graduated from Flint Northern High School in 1977. She then worked at General Motors Assembly Plant “Buick City” in Flint, Michigan, for a time before moving to Killeen, Texas to help raise her niece and God Daughter, Courtney Ella-Chanell. Debra later went to Central Texas College where she received her associates degree and license in Cosmetology in 1997. Her love for hair and makeup led her to become a cosmetology instructor where she spent a lot of time mentoring her students to be their best selves. Debra truly enjoyed her occupation. This was the perfect profession for her because she loved helping others and making them feel beautiful. On May 2, 2003 she married the love of her life, Larry Darnell Wilson. They enjoyed listening to music, watching basketball and football together and taking care of their yard along with Angel their horse. Debra was also a beloved daughter, sister, cousin, friend, and aunt who was affectionately known as “Antee”. She was as beautiful inside as well as the outside. Debra had a calming spirit and her words, although direct, would sooth any troubled heart. She had this way about her to make anyone feel like the most important person in the world while she was with you. Preceding her in death was her father, Johnnie Lee Cole, stepfathers Candy Jones, Sr. and Level Gordon; father and mother in law, Woodrow and Minnie Jean Wilson; grandparents Harbour and Willie Otha Anderson and Willie Lee Lamp; Maude Cole; aunt, Hazel Jean Anderson; uncles, Ezra Lee, Lonnie, and Norris Anderson and Willie Bullins; brothers Dwight (Eva) and Lee (Cheryl) Cole Sr. Debra leaves to cherish her memory; husband, Larry Wilson; step son, Larry Holliday; mother, Gladys Geraldine Gordon; sisters, Cynthia (Johnny) Buford of Louisiana, Cheryl (Hosie) Willis, Gweneth “Pinky” Trejo of Flint, Michigan, Pamela Perry, of Euless, Texas; nephews, Johnnie Dwight Cole, Suhn Rea, Stephen (Krystal) Willis, Lee Cole, Jr, and Aris Trejo; Nieces, Raquelia “Kellie” (David) Jackson, Sheila, Cynthia, Theresa (Terry Robertson) , Lakendra Willis, Courtney (Jordan) Brown, and Chanice Cole; step grandchildren, Austin, Lymia, Kamary, Jordan, and Sharda Holliday. Debra leaves so many loving great-grand nieces and nephews, cousins and friends. ....... Luke 8:52 - "Weep not; she is not dead, but asleep.",,,,,

Debra Yvette &#8220;Sugar&#8221; Wilson, 62, of Joshua, Texas, returned peacefully to her heavenly home on May 10, 2021 after a valiant battle with an illness. Debra will be forever and lovingly remembered by her best friend and husband of 18... View Obituary & Service Information

The family of Mrs. Debra Yvette Wilson created this Life Tributes page to make it easy to share your memories.

Send flowers to the Wilson family.