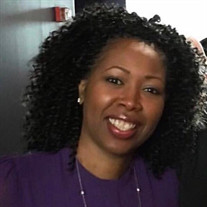 On September 30, 2019, Denee Jeanette James, Loving Mother took her last breath on earth and her first breath into eternity into the presence of the Lord. Born on February 24, 1963 in Augsburg, Germany, to Willis James and Dolores Green Whitfield ("Nonnie"), Denee was the youngest child of seven. Denee received her education at Alabama A&M University in Huntsville, AL. Her love for Business, fashion and travel allowed her to travel the country as a model for the Septia Fashion Review based outside Atlanta, GA. Later she continued her love for travel working as a Flight Attendant for American Airlines and eventually as a Flight Services Manager. After 911, she landed in Columbia, South Carolina, where she turned her attention to being a wife to Joseph Jouries James, III ("Joe") for 20 years and to motherhood. Through motherhood, Denee found her greatest joy in life -- raising her son, Joseph Jouries James, IV, the true light of her life. Denee was a faithful member of Brookland Baptist Church in Columbia, where she served in many areas as a volunteer. Before leaving SC, Denee held the position of Student Success Coordinator and Entrepreneurship Instructor for Richland One Middle College where she built out their Students Entrepreneurship program. She was a passionate educator who invented the success of her students. Always a true servant, upon moving back to Texas in 2017, Denee joined the Potter's House Church of Dallas and immediately began to volunteer in several ministries, to include: MegaCare and their work with The Widows Project, Firehouse Youth Ministry, and gave of her time to the S.T.E.A.M. summer camp. Above all else, Denee loved the Lord and kept a song of praise on her lips, even to the very end. Denee was preceded in death by her parents, Willie James Whitfield and Dolores Green Whitfield aka "Nonnie". She is survived BY HER Son, Joseph J. James IV; his Father, Koseph J. James the III, her six siblings Wanda J. Williams (Samuel - Deceased); Donald Whitfield (Leonor); Donna M. Williams (Harold - Deceased); Cherie R. Lyle: Carole W. Shannon (Louis); Carlos R. Whitfield (Felecia); Nieces and nephews; Robert D. Lyle, Kellie Nikkol Williams, Alexander Whitfield, Lauren Whitfield, Charmain Strickland, Tyler Hampton Shannon, and a whole hosts of aunts, uncles, cousins and friends.

On September 30, 2019, Denee Jeanette James, Loving Mother took her last breath on earth and her first breath into eternity into the presence of the Lord. Born on February 24, 1963 in Augsburg, Germany, to Willis James and Dolores Green Whitfield... View Obituary & Service Information

The family of Denee Jeanette James created this Life Tributes page to make it easy to share your memories.

Send flowers to the James family.