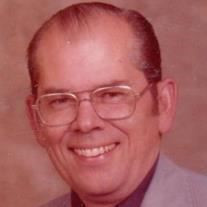 HURST -- Edwin Carrol Cain, 85, passed away Sunday, Nov. 30, 2014, surrounded by family and friends. Service: 10 a.m. Thursday at Lucas Funeral Home, 1321 Precinct Line Rd., Hurst. Visitation: 5 to 7 p.m. Wednesday December 3 at Lucas Funeral Home. Ed was born Dec. 18, 1928, in Fort Worth. He was raised in Handley by his parents, Arphus and Mattie Cain. Ed married Shirley Mae Thompson, the love of his life, Nov. 26, 1948, and they celebrated their 66th wedding anniversary the day before Thanksgiving this year. He loved life and accomplished much in his 85 years. He was a Boy Scout, a Navy veteran during the Korean War, and a successful businessman, serving as president of Consolidated Equipment Sales until his retirement in 1986. He was an avid fisherman and loved spending time in the Colorado Rockies. He was a private pilot, a talented wood craftsman and a man with many diverse interests. Ed had a strong personal relationship with Jesus Christ and shared his faith with many. He was preceded in death by his parents; his sister, Veronica; and his brother, Webb. Survivors: His wife, Shirley; his daughter and son-in-law, Sheila and Tom Rowan; his nieces, Barbara Barton, Veronica Chapman and her husband, Andy, and Judie Brooks and her husband, Tom; two grandchildren; three great-grandchildren; and numerous great-nieces and great-nephews. Ed was a loving and faithful husband, father, a friend to many and loved by all.

The family of Edwin C. Cain created this Life Tributes page to make it easy to share your memories.

Send flowers to the Cain family.