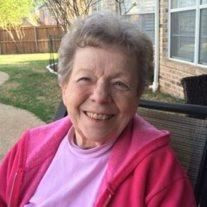 Eleanor “Jimmee” Winzeler, 80, passed away on Friday, August 22nd, 2014. Memorial Service: 1:00 p.m. Saturday, August 30th at Lucas Funeral Home, 137 East Hill Street in Keller, Texas. There will be a reception immediately following the service at the home of Mike and Leigh Winzeler at 2609 Wildcreek Trail in Keller, Texas. As with the memorial service, it’s Jimmee’s request that this time be a celebration of life. Eleanor Winzeler was born in Hastings, Nebraska on November 1st, 1933 to Lowell C. Brock and Bernice Swanson Brock. The family then moved to Denver, Colorado and then on to Spokane, Washington. “Jimmee” attended Whitman College in Walla Walla, Washington. While there, she met her future husband of 60 years, Barry Winzeler. They were married in Spokane at the Episcopal Cathedral on August 14th, 1954. Jimmee was a wonderful, faithful Army wife. She provided loving homes at several Army posts across the United States as well as Japan. They would go on to have three sons, Steven, Don and Michael. After retiring from the Army, Jimmee and Barry eventually settled in Reno, Nevada. During their 30 plus years there, Jimmee forged lasting relationships with her friends in her Bridge, Tai Chi groups and the “Lunch Bunch”. An extended illness would eventually bring Jimmee to Keller, Texas where she lived under the care of her son Michael, daughter-in-law Leigh and grandson Thomas. During her eight month stay in Keller, Jimmee’s vivacious personality made her many friends. Truly, to know Jimmee, was to love her. Jimmee was preceded in death by their son Steven. Jimmee is survived by her husband LTC (ret.) Barry Winzeler, her sister Patsy L. Brock, her son Don Winzeler and his wife Jane, son COL (ret.) Michael Winzeler and his wife Leigh, as well as numerous grand-children and great-grandchildren. Memorials: In lieu of flowers, donations can be made to Community Hospice of Texas, 6100 Western Place, suite 105, Fort Worth, Texas 76107. Phone (817) 870-2795. Lucas Funeral Home - Keller - 817-753-6800

The family of Eleanor "Jimmee" Winzeler created this Life Tributes page to make it easy to share your memories.

Send flowers to the Winzeler family.