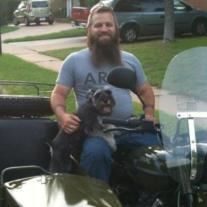 HURST -- Eric Kent Peterson, 32, passed away Saturday, Dec. 13, 2014. Memorial service: 2 p.m. Saturday, Dec. 20, at St. Andrew Lutheran Church, 504 W. Bedford-Euless Road, Hurst. Eric was born to William L. and June Peterson on Aug. 28, 1982, in St. Paul, Minn. The following year he moved with his family to Aurora, Colo., where he began his early education and boyhood adventures. In 1991, the family moved to Keller, where Eric continued his education and graduated from Keller High School in 2001. After working for a couple of years as a chef, he enlisted in the Army, completed basic training and was assigned for two years to Hohenfels, Germany, and after that to Fort Bliss in El Paso. His primary specialty was M1 armor crewman; he served in 2007 in Iraq. During his Army career, he received numerous decorations and was honorably discharged after five years, nine months of service. Upon his return to Fort Worth, he sought employment at Military Gun Supply using his knowledge and interest in firearms; he was employed there at the time of his death. Being a young man with boundless enthusiasm for life, Eric enjoyed many interests and hobbies. These interests included cooking, gardening, blacksmithing, reading, video games, fishing, camping and socializing with family and friends. He was good-natured, loving and generous, and enjoyed a wide circle of friends. Eric, beloved son, brother, family member and friend, you are gone from us far too soon and will be sorely missed and always loved. Survivors: Parents, William L. and June Peterson of Keller; sister, Kendra Peterson of Phoenix, Ariz.; aunts and uncles, Allen and Margaret Kent of Littleton, Colo., and Bruce and Sue Peterson and Jerry and Carol Kittler, all of Glendive, Mont.; six cousins; and his trusty companion, Trigger, a miniature schnauzer.

The family of Eric Kent Peterson created this Life Tributes page to make it easy to share your memories.

Send flowers to the Peterson family.