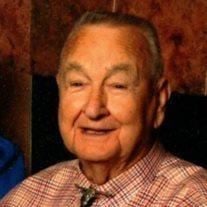 Frank Allen, age 88, passed away Wednesday, May 7, 2014. Graveside service: 1:30 p.m. Monday at Bourland Cemetery in Keller. Survivors: His wife, Betty; son, Bob Allen; daughters, Susan Arnold and Nancy Prochaska (and her husband Kevin); grandchildren, Kevin Arnold (and his wife Kathryn), Stacy Arnold, Austin Prochaska and Mason Prochaska; and great-granddaughter, Reagan Blum. Frank was born March 1, 1926 to Gordon Allen and Annie Clem Allen on the family farm outside of Glenn, Georgia. He was one of 12 siblings, and 6 have pre-deceased him. He served in the US Army from 1944 to 1949 and achieved the rank of Sergeant. He graduated from Southern Technical Institute, a division of Georgia Tech, in 1952 with an Associate Degree in Industrial Management. He married Betty Louise Jameson June 10, 1951 and would have been married 63 years next month. His first job out of college was a sales rep for American Meter Company and he did various work before ending up in Austin, Texas in 1967 where he owned Water Tank Services and worked all over the country sandblasting and painting water storage towers. The last company he owned before retiring was Allen Drilling Company which was part of a civil engineering company. In 2002, he moved to Fort Worth, Texas area to be closer to his daughter, Nancy. Frank enjoyed working with his hands to either build or fix things. He had a mechanical mind and was good with engines and equipment. He loved sailing and rebuilt 3 sailboats over the years. He was a great conversationalist, who seemed to know a little bit about everything. Frank was an honest, hard-working, Christian man who provided well for his family and cared deeply about them. He will be greatly missed, but we all know we will someday be reunited with him in heaven. Lucas Funeral Home-Keller 817-753-6800

The family of Frank Harvey Allen created this Life Tributes page to make it easy to share your memories.

Send flowers to the Allen family.