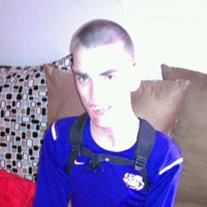 The second Hunter entered this world we knew he was going to be a very special blessing. Hunter was born with significant disabilities and a handicap that called for a long, tough road. He outlived his odds by many years. He was a fighter, he was courageous, strong and very good at being him. His disabilities offered many trials in his life but he always seemed to beat them one after another. Hunter loved hats and as a kid there weren't many times you wouldn't see Hunter wearing a hat frontwards or even backwards. Often you would catch him just holding it out in front of him, turning it every which direction admiring it by looking at it from every different angle. He also enjoyed music. Hunter loved to ride in the car and listen to music. One of his favorite things to do was blare the music while he watched his dad create beats and play the drums on the steering wheel and dashboard while he sang to him. Looking out of the corner of his eyes he would cover his mouth hiding the biggest smile you could ever imagine. Hunter loved to attend his sister and brother's sporting events. He would always leave with dry cracked hands from clapping so much and red knees because he slapped them so hard out of excitement. You could also find him in the middle of the football field without pads as our mother was frantically chasing him down the field while the referees were blowing their whistles to stop the play. Hunter wanted to be just like his brother, Christopher and play football. As Hunter aged and grew, certain disabilities began to make him more ill more often as his size began to work against him. Hunter grew big and tall just like his mother and father but he began to lose strength after time. He fought a long, hard battle. Hunter was our mother's shadow. He was well aware of the amount she loved him and the amazing care she offered him. His family was taken back by the fact he outlasted her by 10 years. Hunter was ready to go home to be with The Lord. In everyday life it seems he was taken far too young but for this special case it was right on time. His mother was waiting with her wings wide open to welcome him where he will be renewed and restored. He will fly with angels, run with the best of them, speak things he has always wanted to say out loud, and eat things he has always dreamed of tasting. Things he could never do in his earthly body he can do in the Heavenly fathers house. Preceded in death by his mother Taryn Roxanne Shortridge Survived by his father, Jeff Shortridge (NRH) sisters Lindsey Mcmillen-NRH, Kirsten Shortridge of Brossard, LA, Chelsea Mielke of Choctaw, OK, and brother Christopher Goscinski of Sallisaw, OK. Grandparents Robert & Renee Reed of Tulsa, OK, 4 nephews Tyler, Chaden, Cooper, & Isi, 1 niece Tori and many cousins

The second Hunter entered this world we knew he was going to be a very special blessing. Hunter was born with significant disabilities and a handicap that called for a long, tough road. He outlived his odds by many years. He was a fighter, he... View Obituary & Service Information

The family of Hunter Barrett Shortridge created this Life Tributes page to make it easy to share your memories.

The second Hunter entered this world we knew he was going to...

Send flowers to the Shortridge family.