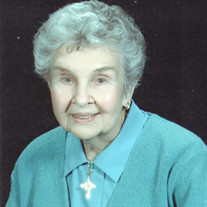 Jean Lochtrog FORT WORTH -- Jean Marie Albrecht Lochtrog, March 20, 1922 - Dec. 2, 2016, died Friday morning, Dec. 2, 2016, ending a full and happy life. Celebration of life: 2 p.m. Thursday at First Christian Church in downtown Fort Worth. The family invites you to join them after the service in Fellowship Hall to share your stories. Memorials: In lieu of flowers, memorial gifts may be made to First Christian Church, 612 Throckmorton, Fort Worth, Texas, 76102; Camp Fire First Texas, 2700 Meacham Blvd., Fort Worth, Texas, 76137; or Texas Christian University, TCU Box 297044, Fort Worth, Texas, 76129. Born in Riverside to Conrad Robert "C.R." Albrecht and Laura Bell Housewright Albrecht, the Albrecht's were one of the original families in Riverside and she maintained deep ties in that community. Jean was on the Cradle roll and lifetime member of First Christian Church, Fort Worth, where her parents met and married. Jean sang in the choir until last year, played the piano for her Sunday school class and was active in women's ministries. As a Camp Fire Girl, she went to Camp El Tesoro the year it opened in 1934 and was Camp Fire leader for her daughters' clubs in the 1960s. At age 16, she graduated from Riverside High School (now Carter-Riverside High School) and then from TCU in 1942 with her Bachelor of Arts in Music. Co-founder of TCU Women Exes Thursday group, she was involved with TCU Women Exes until earlier this year. While she worked at Consolidated Vultee Aircraft Corporation (now Lockheed Martin), she met the love of her life, Donald Frederick Lochtrog. They married at First Christian on Dec. 8, 1944, and had two daughters, Debra and Diane. In 1977 Jean and Don began escaping from the Texas heat by spending half of the year at their cabin in Colorado. She was an active, loving Christian woman and a good example for all. Mrs. Lochtrog was preceded in death by her parents; husband; and brother, Irvin Alcorn. Survivors: She is survived by her sister, Bobbye Sue Albrecht Stauffer and husband, Blaire; daughter, Debra Lochtrog and husband, Bill Carrell; daughter, Diane Lochtrog Johnson and husband, Gary; grandchildren, Laura and husband, James, great-granddaughter, Karen Marie, Lily and husband, Paxton, Jeoffrey and wife, Adrienne; nephews and nieces, Barry Alcorn and wife, Kris, Byron Alcorn and wife, Melissa, Janet Hall Price and husband, Al, and Mary Hall; "foreign family," Dr. Jadan Abbassi and wife, Amal, and Natalia Murga Esobedo and husband, Mario. Arrangements entrusted to Williams and Lucas Funeral Home, Fort Worth

The family of Mrs. Jean Marie Lochtrog created this Life Tributes page to make it easy to share your memories.

Send flowers to the Lochtrog family.