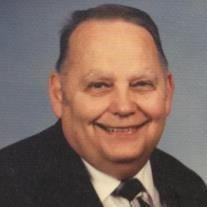 BEDFORD -- John Pryde "Bud" Hale passed away February 4, 2015. Funeral: 9:00 am Tuesday, February 10, 2015 at Legacy Church of Christ, North Richland Hills. Visitation: 6:30 to 8:30 pm, February 9, 2015 at Lucas Funeral Home, Hurst. Burial: Lawnview Cemetery, Cordell, Oklahoma. On February 21, 1932, John “Bud” Pryde Hale was born to Dr. and Mrs. (Leta) Pryde E. Hale in the coal mining country of Lynch, Kentucky. Dr. Hale was working for the mining company as the company physician. It was a very hard life but Dr. Hale eventually saved enough money to move to Clovis, New Mexico where his father, also a doctor, lived and worked. Bud, as he was known, grew up and attended school in the Clovis New Mexico area. His father enjoyed working on the ranch with his brother Bill. Bud graduated from Clovis High School and served in the Army. There he worked as a “deuce and a half” driver. For you civilians, that's a two-and-half ton truck. He also worked with the teams to implement new ways to purify water. After returning from the military, Bud went to college at Southwestern Oklahoma State University. There he studied Pharmacy. This is at this time that he met the love of his life and future wife, Virginia Lee Brandon. Virginia was a local farm girl and Bud was a doctor's son with a flashy car. After graduation, the couple moved to Healdton Oklahoma and were married there. Bud obtained his first Oklahoma state license in Healdton Oklahoma for the amazing price of $2.50. Bud then had the chance to move back home to Clovis. While in Clovis, their first child was born in June of 1959. The family then moved to Tulia Texas for Bud's new job. He was later offered another opportunity in Hobert Oklahoma and he moved his family there. Around 1963, an opportunity presented to buy Hurst Pharmacy in Hurst, Texas. So Bud moved his family to Bedford Texas and took over the ownership of Hurst Pharmacy. Always looking for a better opportunity, Mr. Shields in Euless, had decided to retire and place his pharmacy, Shields Pharmacy, up for sale. Bud sold Hurst Pharmacy and bought Shields Pharmacy, which was collocated with the offices of several doctors. The business flourished and in the meantime, Bud and Virginia had a beautiful baby girl in 1964 and named her Leta Louise. The business quickly outgrew the location and Bud decided to build a bigger building. He moved the business just North on Main Street, where it remained for many years. Bud was very well known in his community and was very active. He touched many people's lives helping them care for their children and for themselves. Many times he would fill a prescription during the night for someone who was ill. He was very active in the Airport Freeway Church of Christ and was a deacon there. After many years at Shields, Bud heard of an opportunity to buy Riverside Rexall Pharmacy on Riverside Drive in Fort Worth. Supported by his loving wife, Virginia, an astute business person in her own right, decided to purchase the pharmacy on Riverside. With honorable ethics, Bud worked tirelessly. After many years, Bud decided it was time to slow down and he sold Riverside Rexall. Not one to be inactive, he immediately started working as a relief pharmacists for several companies in Texas and in New Mexico. During this time he lived in Midland, Santa Fe and Clovis. In 1998, his daughter Leta, who followed in her father's footsteps and became a pharmacist, was tragically killed in a car accident. In 2007, his beloved Virginia passed away. Suffering the loss of his wife and daughter, he decided to permanently reside in Clovis with his sister Francis. Francis and Bud later decided to move to a nice retirement home in Amarillo. After her death, Bud moved back to the area to be with his son Brandon, sweet daughter-in-law Jennie, who passed away in December 2014, and grandson Brandon, in Bedford, Texas. As a faithful follower of Christ, he has attended Legacy Church of Christ. Bud has always continued to serve the community and those he holds dear. During his life, he never met a stranger, never turned someone away in need and would always greet you with a warm smile and a dumb joke. The four most important things in Bud's life were: God, family, helping others through the practice of pharmacy and hamburgers. He is survived by one brother, Dr. William P. Hale of Amarillo; one son, Brandon Hale; three grandchildren, Katie Nelson, Brandon Hale, Jr., and Sydney Black; two great-grandchildren Keegan Nelson and Judah Black.

The family of John "Bud" Pryde Hale created this Life Tributes page to make it easy to share your memories.

Send flowers to the Hale family.