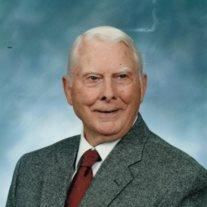 Leonard Milton Clinton was born in Wanette, Oklahoma on Friday, August 22, 1924 to Leonard Milton and Daisy Mae Clinton. Leonard grew up on his family’s farm helping his father with chores and caring for the farm’s animals. Leonard attended King School (a one-room school house) in Pottawatomie County, Oklahoma, graduating from 12th grade in the spring of 1943. After graduation, he joined the United States Air Force. Due to deafness in one ear, he was honorably discharged following his 3-months basic training. Leonard married Bernadine Carman on Saturday, November 20, 1943. They moved to Pasadena, California, where they lived until moving to Tulsa, Oklahoma in 1952. Leonard became employed at American Airlines, working as an Airplane Inspector for 34 ½ years, retiring in January, 1987 Following retirement, Leonard and Bernadine moved to the Tulsa suburb of Broken Arrow, Oklahoma. Leonard’s hobbies were watching football, baseball and basketball; he was an avid reader, History being his favorite subject and he enjoyed photography. He played checkers and dominoes and other types of card and board games. Later in his life, Leonard competed in checkers with people around the world on his computer, reaching the “master” level. His favorite snacks were Snicker Candy Bars and Nutty Buddy Bars. During their marriage, Leonard and Bernadine were able to travel to Mexico, Spain, Holland, Germany and other countries. They also traveled through all of the 50 United States. In April, 2012, Leonard and Bernadine moved to Ft. Worth, Texas, to be closer to their family. Leonard was a member of Central Church of the Nazarene in Tulsa for 57 years and a member of the Northside Church of the Nazarene, Ft. Worth, TX, until his death. Leonard Clinton went to be with his Lord and Savior on Saturday, May 3, 2014. Leonard was preceded in death by his parents and brother. Leonard is survived by: His wife of 70 years, Bernadine Carman Clinton; His Three Children: Lawrence Powell Clinton, Kalispell MT, Michael Keith Clinton, Midland TX, Sherry Clinton Briscoe, Ft. Worth, TX; 5 Grandchildren; 8 Great-Grandchildren; 1 Great-Great-Grandchild. Leonard Milton Clinton will be missed dearly by his family and friends. And though he is no longer with us on earth, he will live forever in the hearts and the minds of those who love him.

Leonard Milton Clinton was born in Wanette, Oklahoma on Friday, August 22, 1924 to Leonard Milton and Daisy Mae Clinton. Leonard grew up on his family&#8217;s farm helping his father with chores and caring for the farm&#8217;s animals. Leonard... View Obituary & Service Information

The family of Leonard M Clinton created this Life Tributes page to make it easy to share your memories.

Leonard Milton Clinton was born in Wanette, Oklahoma on Friday,...

Send flowers to the Clinton family.