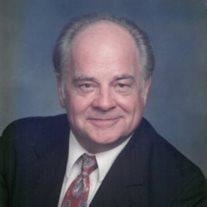 COLLEYVILLE -- Les Kassing, a loving husband, father, grandfather and brother, passed away Monday, May 5, 2014. Les lived an amazing life of faith. Four sons, one daughter and 18 grandchildren have been baptized in the faith by his example and the power of the Holy Spirit. And this is his legacy. His family knows that Les is in heaven, a promise kept by his Savior. Memorial service: 11 a.m. Wednesday, May 14, Peace Lutheran Church, 941 W. Bedford Euless Road, Hurst. Visitation: The family will receive friends 5 to 7 p.m. Tuesday at Lucas Funeral Home, 1321 Precinct Line Road, Hurst. Memorials: To honor Les the family requests contributions to the Rinn Endowment Fund-Youth in care of Peace Lutheran Church. Les was born Nov. 7, 1930, in Indianapolis, Ind., and passed away May 5, 2014, in Colleyville. He married his high school sweetheart, Vanita Kleinschmidt, on May 1, 1954, after serving in the Army during the Korean War. From 1957 through 1963, Les and Vanita's five children were born and baptized. Les completed his law degree (Order of the Coif) at Indiana University in 1958. He then joined the Trust Department at Indiana Bank and Trust, in Fort Wayne, Ind., where he remained until 1971, rising to executive vice president. In 1971, Les accepted the opportunity to become CEO of Jefferson Bank in Peoria, Ill., where he remained though November 1981. From 1982-1984, Les was president of Southwestern Bank in Oklahoma City, Okla. In 1987 Les founded a software company called MARQUIS, which is currently run by his four sons and employing over 70 people. MARQUIS embodies the spirit of Les Kassing by living out his business philosophy: do everything with integrity, be generous, fair and trustworthy in all things. Throughout his life and career, Les was ever generous with his time, talents and money in support of Concordia Lutheran High School in Fort Wayne, Ind. (his alma mater), Lutheran education, numerous philanthropic and leadership boards, and the Lutheran Home in Peoria, Ill. Les also served in church leadership wherever he lived. Les was known by family and friends to be a man of high integrity, living and working for God's kingdom and the promise of life eternal. Survivors: His bride of 60 years, Vanita C. Kassing who has beautifully cared for him these last few years; son, John Kassing, his wife, Susan, and their children, Ryan, Lauren and Peter; son, Jeff Kassing, his wife Diane, and their children, Michael, Kati and Scott; son, Judson Kassing, his wife Robin, and their children, Hadley, Grant and Peyton; son, Jay Kassing, his wife Jennifer, and their children Jack, Emily, Audrey, Ella and Jet; daughter, Julie Norris, her husband Robert, and their children, Sarah Jensen (her husband Daniel) Matthew, David and Kristin; brother, Tony Kassing, his wife, Nancy, of Fort Wayne, Ind.; brother, Robert Kassing, his wife, Troy, of Indianapolis, Ind.; sister, Susi Dettmer, her husband Robert, also of Fort Wayne; and many other extended family and friends.

COLLEYVILLE -- Les Kassing, a loving husband, father, grandfather and brother, passed away Monday, May 5, 2014. Les lived an amazing life of faith. Four sons, one daughter and 18 grandchildren have been baptized in the faith by his example and... View Obituary & Service Information

The family of Lester A. Kassing created this Life Tributes page to make it easy to share your memories.

Send flowers to the Kassing family.