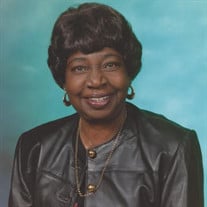 Magnolia Wright Taylor McGaskey “I have fought a good fight. I have finished my course. I have kept the faith. Henceforth there is laid up a crown of righteousness, which the Lord, the righteous judge, shall give me at that day, and not to me only, but unto all them also that love His appearing.” (2 Timothy 4: 7-8) Magnolia Wright McGaskey exchanged this earthly life for life eternal on Saturday, October 26,2019. Magnolia, affectionally known as “Earsite” was born in Tamo, Arkansas on October 16, 1926 to the late Mr. Ollie Wright and Mrs. Ozedia Watson Ingram. As a young girl, Magnolia moved to Texas with her mother, grandmother and several family members during the late 30’s. After completing her education in Fort Worth, Texas, Magnolia married Milton W. Taylor Sr. and to this union, her only son, Milton W Taylor, Jr. was born. She prided herself on being a devoted and doting Mother to her only son she lovingly referred to as “Junior” who preceded her in death in January, 2019. During the late 50’s, Magnolia ventured to Los Angeles, California in search of greater opportunities for her family. It was in California where Magnolia met and eloped to Tijuana, Mexico to marry her husband of 28 years, Army veteran, Henry McGaskey . Magnolia attended beauty school earning a license as a cosmetologist in the State of California. She was an active member of the American Legion, American Red Cross and enjoyed participating in veteran community activities. Magnolia loved the Lord and was very active in her Los Angeles’s church community where she was a devoted member of the Missionary Ministry and the Usher Board. Magnolia held several leadership roles as a 40 year member of The Order of the Eastern Star and several masonic affiliated organizations, including Worthy Matron and chapter Delegate for over a dozen state and national conventions. Magnolia enjoyed traveling with girlfriends, dressing in beautiful gowns for formal events and staying connected with her family in Texas, Arkansas, California, Missouri and Illinois. After the death of her husband Henry in 1992, Magnolia returned south to be closer to her family in Fort Worth, Texas. As a retiree in Texas, Magnolia lived a full and active life. She joined Meadowbrook First Baptist Church and continued volunteering and serving vetern communities through the American Legion. She rekindled a special companionship with her dear friend, Mr. James “Snoopy” King, and his adult children until his death. Magnolia was blessed to celebrate her loving “Mother Ozedia” becoming the first Centenarian in the Watson Family before her passing in 2011. Magnolia “Earsite” will be truly missed by family, friends and pet poodle companion,” Precious.” However, we thank God for her influence and legacy for over 93 years. Her memory lives on and will be cherished by her surviving grandchildren, nieces, dear cousins and caretaker, Brenda Harris, and a host of cousins, family and friends through the Wright, Harris, Townsend connection.

Magnolia Wright Taylor McGaskey &#8220;I have fought a good fight. I have finished my course. I have kept the faith. Henceforth there is laid up a crown of righteousness, which the Lord, the righteous judge, shall give me at... View Obituary & Service Information

The family of Mrs. Magnolia Earsite McGaskey created this Life Tributes page to make it easy to share your memories.

Send flowers to the McGaskey family.