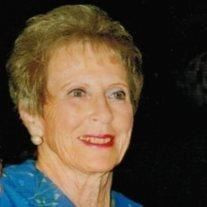 Mary Ellen Powers Hughes peacefully passed away on February 14, 2014 in Keller, Texas. Visitation will be Wednesday February 19, 2014 from 6-8 PM at Lucas Funeral Home in Keller, 137 E. Hill St. 76248. Funeral Service will be at 11:00am Thursday at the Lucas Funeral Home Chapel in Keller. Burial will follow at the Dallas-Fort Worth National Cemetery, 2000 Mountain Creek Parkway, Dallas, Texas 75211. Mary Ellen was born on April 7, 1925 and was the only child born to Winfred Duncan 'Fred' Powers and Hattie Esper Davidson Powers from Britton, Oklahoma. When she was fourteen she was on a hay ride with several of her friends. A handsome young man of fifteen, Alfred Claude Hughes rode a horse up next to the hay ride and asked her if she wanted to go for a ride. She said it took her about three seconds to decide her answer was YES. That was the beginning of a 71 year love affair ... 67 of those years were married years. She was blessed. She was born to two loving parents and was married to a great husband and had a family and friends that loved her. She met so many wonderful people in her lifetime. She was still in touch with many of her high school friends and others she met throughout her life. On November 29, 2010, her sweetheart, Claude left this earth and went to live with Our Heavenly Father. She has been waiting to join him. She is preceded in death by her husband, Claude and her great grandsons, Dax and Dalton. Mary Ellen is survived by two daughters and their spouses. Claudia Hughes Davis and husband Don of Heath, Texas and Pamela Hughes Cartwright and husband Roger of North Richland Hills, Texas. Also surviving her are three grandchildren, Jacob Tindall and wife Cindy, Amy Weathers and husband Robert , Wade Cartwright and spouse Blake Burba and four step grandchildren, Randy Davis, Chris Davis, Donna Gingras and husband Phil and Susan Davis and ten great grandchildren.

The family of Mary Ellen Hughes created this Life Tributes page to make it easy to share your memories.

Send flowers to the Hughes family.