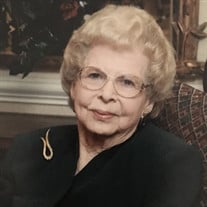 SOUTHLAKE -- Mildred "Marie" Spivey went to be with her Heavenly Father on Thursday, June 23, 2016, peacefully in her sleep. Funeral: 2 p.m. Tuesday at William & Lucas Funeral Home, 517 N. Sylvania Ave., Fort Worth, 76111. Visitation: 1 p.m. Tuesday at the funeral home. Marie Spivey was born on Feb. 25, 1925, to Felix Doff and Pearl Richards Staton in Corsicana. She moved to Fort Worth as a young girl and graduated from Paschal High School. She was orphaned just before high school graduation and was taken in by the Leito family of Fort Worth. She married Claude Garland Spivey of Fort Worth in 1944. She had four children: Claude Jr., Bill, Suzette and John. Marie was always a homemaker, but she helped her husband as he built his business, Eutectic Metals, Inc. She was a longtime member of Birdville Baptist Church in Haltom City, teaching the Ruth Women's Sunday School Class for over 35 years. She was also an avid traveler, going on three round the world trips. She visited the Maasai People of Kenya; rode camels by the Great Pyramid of Giza; rode an elephant by the Taj Mahal; walked the Great Wall of China - back in the late '70s prior to the era of open travel to China; and was blessed by the Pope at the Vatican. She had a full life, steeped in adventure and love. Her favorite thing to do was to host church friends or her family at her house for dinners or any special occasion. And although the last several years have been difficult ones for Marie physically, she always enjoyed getting visits from friends and family. She was preceded in death by her mother and father; by her husband, Claude Garland Spivey; son, Claude Garland Spivey Jr.; and by her sisters, La Rue Burke and May Dell Cooper. Survivors: She is survived by her sister-in-law, Norma Lee McDonald (that she considered a sister); children, Bill Spivey and his wife, Janice, Suzette Payne and her husband, Grady, and John Spivey and his wife, Carla; and grandsons, Donald Payne, Robert Payne, Cole Spivey, Clint Spivey and Cameron Spivey; and granddaughters, Teresa Draper (who she treated as a daughter) and Anna Morrison; by 10 great-grandchildren; and numerous She is also survived by her dear friend, Ruby Hubbard.

The family of Mildred "Marie" Spivey created this Life Tributes page to make it easy to share your memories.

SOUTHLAKE -- Mildred &quot;Marie&quot; Spivey went to be with her Heavenly...

Send flowers to the Spivey family.