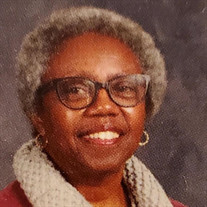 Sandra Gail Johnson-McCreary was born April 13, 1951 in Tallahassee, Florida to Augustus Laurie Johnson Sr. and Juanita Virginia Washington. Sandra accepted Jesus Christ as her Lord and Savior at the early age of nine, under the leadership of Reverend S. J. Stanley, Tabernacle Missionary Baptist Church in Tallahassee, Florida. She graduated from Tallahassee's Leon High School in 1969. She then went on to attend Texas Christian University where she earned a Bachelor of Science in Nursing. Believing one is never too old to learn, she earned her Master of Science in Nursing from Kaplan University in 2012. During her undergraduate studies, she met and later married Robert Wayne McCreary Sr., to whom she has been married for 46 years. Together they raised their three children: Chaundre, Robert Jr. (deceased), and Reginald in Fort Worth, Texas. Sandra was an active member in the Fort Worth Alumnae Chapter of Delta Sigma Theta Sorority, Incorporated, as well as the Lambda Eta Chapter of Chi Eta Phi Sorority, Incorporated. As a registered nurse for over 40 years, Sandra's entire career centered around caring for others. At John Peter Smith Hospital she cared for people in the Outpatient Clinic, and later as a Nurse Case Manager. Yet children were her passion. For the last 25 years she had been the School Nurse at Ridglea Hills Elementary in Fort Worth, Texas. And in 2012 she received the prestigious Bayard H. Friedman Hero Award, and was recognized as the most outstanding School Nurse in all of North Texas. She believed a healthy mind and body helped to develop a healthy character. Sandra was also an active and faithful member of Mount Pisgah Missionary Baptist Church for over 40 years. There she served The Lord in many ways: She was a member of the Inspirational Choir, The Women's Chorus, The Truthseekers Sunday School Class, and Discipleship Training Union Number Seven and a member of Mission Emphasis. She also served for a time as Sunday School Director of the Children's Primary Department, and taught Sunday School in that same department. Sis. Sandra McCreary was also a Youth Mission Group Leader. She even served as Chairwoman for one of Mount Pisgah's Annual Women's Day Celebrations. But one of her greatest joys was directing the children of Mount Pisgah's Cherub Choir on Sunday mornings as they sang for The Lord. Sandra is survived by her husband Robert McCreary Sr.; her daughter Chaundre McCreary;her son Reginald McCreary; her sister Wyneva J.Austin; her brother Augustus L. Johnson Jr. (Hattie Mae Johnson); her uncle Lamar Johnson; her aunt Inez Williams; her aunt Leola Brown; and a loving host of nieces, nephews, other relatives, friends, and Sparky, her beloved cat. ATTENDANCE AT THE VISITATION AND FUNERAL SERVICE WILL BE LIMITED, SOCIAL DISTANCING WILL BE PRACTICED AND MASKS MUST BE WORN.

Sandra Gail Johnson-McCreary was born April 13, 1951 in Tallahassee, Florida to Augustus Laurie Johnson Sr. and Juanita Virginia Washington. Sandra accepted Jesus Christ as her Lord and Savior at the early age of nine, under the leadership... View Obituary & Service Information

Send flowers to the McCreary family.