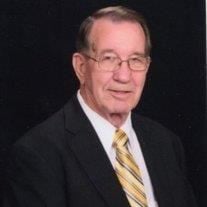 EULESS -- Tommy Wayne Smith, 71, passed away peacefully at his home surrounded by his family on Saturday, Oct. 5, 2013. Funeral:10 a.m. Wednesday, Bedford Church of Christ. Interment will follow at 2:30 p.m. in Chico Cemetery, Chico. Visitation: 6 to 8 p.m. Tuesday at Lucas Funeral Home in Hurst. Tommy was born July 8, 1942, to Roy and Winnie Powers Smith. He was a 1960 graduate of Chico High School. On Oct. 10, 1961, Tommy married Evelyn Carlisle. He proudly served in the Army as a military policeman and later became a Dallas policeman. Tommy later retired after 46 years in the insurance industry. He was a devoted Christian and was a very active member of Bedford Church of Christ. He was a devoted husband, father and grandfather. Survivors: He is survived by his wife of almost 52 years, Evelyn; sons, Tony and wife, Debra, of Keller, Steven and wife, Theresa, of Sanger, Keith and wife, Erina, of Roanoke; sister, Dorothy Rose; brother, Bill and wife, Mary, of Euless; six loving grandchildren; numerous nieces, nephews, other friends and relatives.

The family of Tommy Wayne Smith created this Life Tributes page to make it easy to share your memories.

EULESS -- Tommy Wayne Smith, 71, passed away peacefully at his...

Send flowers to the Smith family.