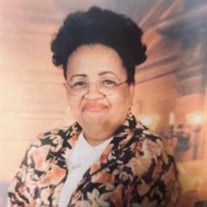 Tracy was born in Granger, Texas July 12, 1933 to Emiel "Money" Brown and Johnnie Luvern Warren. Later, the mother she would grow up to love was Willie Mae Brow whom Money would marry. Willie Mae would raise Tracy as her own along with her two younger siblings, Amos and Kay. Although they were close in age, Tracy would call Willie Mae "mama" amd respected her position for the rest of her life. Tracy would also follow on the skirt tails of her beloved grandmother, Lily Easter Brown. They were very close, and she learned a lot about how to take care of her family through Lily's biblical teachings. Tracy was not big on taking children to the hospital, therefore, she would use the same remedies her grandmother used. Tracy attended Anderson High School through the 11th grade. Her first job was in Austin at the Dream Shoppe. This is where her great customer service was born. At the age of 16, Tracy married Mr. Raymond McHenry in the living room of her parent's home. They would soon settle in Fort Worth, Texas on the Northside of town. During their marriage, Tracy gave birth to two children, LaVonne (Red) and Janice. As time passed, their union would dissolve. As life went on for Tracy, Fort Worth became her permanent home. Her first job in Fort Worth was at Anna's Cafe. Tracy would bear three more children Teresa, Jessie and Vickie. In the late 50s-early-60s, Tracy owned a cave on 4th street called Tracy's Playhouse. She would say that they gave away more than they made. This is where she learned that she controlled the spoon. For example, if a customer only had 10 cents, they could only get 10 cents worth of beans. During her time at the Playhouse, Tracy would meet Mr. Sonny Ethley. He was a customer. They called him "Boll Weevil" or "Bo", because she would say "he was looking for a home." Tracy and Sonny blended their families. They each brought 5 children into the equation. What a journey that would be! On June 14, 1962, they would marry in the courthouse and in December they would give birth to their first child Darryl, later would come Eugene and Diana. They would tell everyone that they had a total of 13 children. As years went on, Tracy would work at other places around the city. She worked at Mrs. Baird's Bakery downtown, Mr. Thomas Convenient Store on the Eastside, Dunbar High School as a cook, would be a Quik-N-EZ in Forest Hill, Texas where she managed the store for over 11 years. She had the opportunity to purchase the business for a little bit of nothing but opted out because that was not the type of business she wanted to own. She wanted to own a full-service laundromat that would provide folding and ironing services to the customers. Tracy and Sonny would purchase a home in Forest Hill where she would be a resident for 43 years to date. In the early, 80's she joined Forest Hill Missionary Baptist Church in Fort Worth under Rev. Jackson where she served on the usher board. In 1986 Tracy would gain employment at Sam's Club in Forest Hill, Texas. She started out as a Product/Food Demonstrator. We love demos, right? She would ultimately become the world's greatest Door Greeter you would ever meet. After 30 years of employment, Tracy retired to become Sonny's caretaker as his health declined. On Easter Sunday 2006, Tracy and Sonny would become members of Ambassadors for Christ Christian Center Tracy always wanted a large family which is what she has. Her idea of a large family meant that she would never be alone. Tracy loved her family so much. Tracy would live to see all her children get married and have their own children. She would also witness many of her granchildren get married and have their own children as well as the birth of her great-grandchildren. Tracy did not have favorites. She had a special relationship with every one of her children, grandchildren, great and great-great children. Whether she gave you wisdom, candy, something she ordered or even rolled up money, you could not tell anybody. She made the best Kool-Aid sun tea, Tang and carmel cake just to mention a few. On April 14, 2021, Ms. Tracy would complete her journey here on earth at her home in Forest Hill, Texas as she requested. Her care was provided by Advanced Hospice Care, Darling Home Care, her children and gifting's of her grandchildren. Preceded her in death - Husband: Zelven "Sonny" Ethley; Mother: Johnnie Luvern Warren; Father: Emiel "Money" Brown; Stepmother: Willie Mae Brown; Brothers: Emiel Money Brown "Jr.", Johnnie Mack "Sonny Boy"; Sisters: Kay Washington, Lorena "Rena" James and Joyce Nell Brown; Children: LaVonne "Red" Emmitt, Diane Ethley, Cynthia Ethley and Thomas "Bob" Ethley. LEFT TO CHERISH HER MEMORIES - Brother: Don Brown; Sister: Margaret Morris;;; Children: Janice Cathey (Kevin), Teresa Bedford (Lester), Jessie McHenry, Vickie Hopkins, Darryl Ethley(Melva), Eugene Ethley (Katrina), Diane Payne (Vincent), Zelven "Fella" Ethley and Marily Melton. 38+ Grandchildren, 79+ Great Grandchildren; 12+ Great-Great Grandchildren and a host of extended family.

Tracy was born in Granger, Texas July 12, 1933 to Emiel "Money" Brown and Johnnie Luvern Warren. Later, the mother she would grow up to love was Willie Mae Brow whom Money would marry. Willie Mae would raise Tracy as her own along with her... View Obituary & Service Information

The family of Mrs. Tracy Louise Ethley created this Life Tributes page to make it easy to share your memories.

Send flowers to the Ethley family.