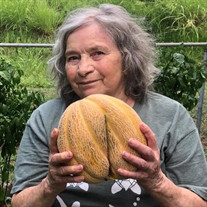 Ute “Karin” Luttrell was born on April 15, 1941 in Karlsruhe Germany and lived in Watauga, Texas until February 16, 2021 when she passed away at the age of 79 years old. Karin married James Madison Luttrell on January 18,1964 at the Diamond Hill Church of Christ. James preceded Karin in death in May 2018. Karin was a mechanical draftsman and engineer working for several companies in the automotive and oil field production business. Karin received her Bachelor’s degree in Germany and completed Auto Cad classes in the computer aided drafting department at Tarrant County College. Karin was a loving and dedicated wife, mother, grandma and friend. A talented cook, artist, craftsman and a green thumb in her garden. A free spirit, she immigrated to the USA in 1963 and married James, at the time she did not speak English. Within just a few short years she learned English and became involved in the school PTA and the local youth sport association the RYA. She was a founding member of the Watauga Lions Club and supported activities including the annual circus for the Moslah Shine temple benefitting the Children’s Hospital. Karin was always active doing arts and crafts, knitting, crochet, leather working and gardening. She enjoyed traveling with Jim and spent many days walking in the Arbuckle Wilderness, Fort Worth Zoo, Clark’s Garden, Fort Worth Botanical Gardens and trips to the River Walk in San Antonio. Later in life Karin and Jim enjoyed many trips to Alaska traveling by cruise ship and train. Karin became a citizen of her adopted country she loved the USA in 1993. She is survived by her son: John Albert Luttrell and wife Maria; grandson Stephen; granddaughter Jordon; great-grandsons Richard and Ayrvin; and son: Scott Allen Luttrell and wife Yvette; grandsons Connor with wife Acacia and Ryker with wife Jasmine. German family survivors her two brothers Jean Claude and Robert Phillip along with many nieces and nephews. Karen was preceded in death her mother Anna Rostater Phillip, step father Albert Phillip and sister Marlyse. Local family survivors include, sister- in- law, Joy Fay Tubbs and her daughters Angela, Ashlee, Amber and their families; and sister- in- law, Peggy June Martindale and her daughter Mendy and her family and a host of friends. A celebration of life service will be held at 10:30 A.M., Tuesday, March 9, 2021 at Williams and Lucas Funeral Home Chapel located at 517 N. Sylvania Avenue, Fort Worth, Texas 76111. Committal service and inurnment will be at 11:00 A.M., Thursday, March 11, 2021 at Dalla Fort Worth National Cemetery next to her husband, Jim.

The family of Ute Karin Luttrell created this Life Tributes page to make it easy to share your memories.

Send flowers to the Luttrell family.