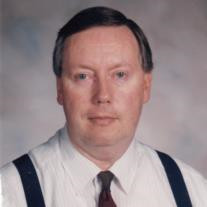 William Arthur Matchette, 79, lost his battle to cancer and went to be with Jesus on June 23, 2018. Arthur was born the only child of Mary Faye and William Hall Matchette on October 20, 1938 in Los Angeles, CA. He lived in California until he was 5 years old and then moved to Fort Worth, Texas with his mother. He was very much a boy with a strong sense of family and greatly loved by his aunts, uncles, grandparents and cousins. He gained a bonus dad when his mother married Paul A. Daly. He called Paul "Daddy" and they truly had a father-son loving relationship. He periodically traveled by train to California to visit his dad and his dad's beloved sisters and parents; he developed a love for travel on the Amtrak and had many dreams of train travel. Arthur graduated from Carter Riverside High School in 1956 and returned to teach there from September 1964 until he retired in May 1997. Arthur's first day of teaching at Carter began many hours before the school day started, as his first daughter, Leah Marie, born to he and his wife, Mary, whom he married in October 1963. He excitedly began that first day with the news, "It's a girl; I am a dad!" Daughters Julie and Laura were one and 5 years later. Arthur adored his daughters and always proud to talk about them to his students and fellow teachers. It was not uncommon for Arthur to have his daughters visit the halls of Carter. Arthur loved Carter Riverside and embraced his role as a great teacher and a well-respected role model. He taught English I, II, III, IV, US History, World History, Honors English and Latin. He sponsored the National Honor Society, Whiz Quiz, Latin Club, English Club, Academic Decathalon, and was the CHS Annual Sponsor for many years. Many students visited the home of Arthur and Mary Matchette and worked on the CHS annuals there. Leah, Julie, and Laura were well known by the students at Carter, through visits to the house, as well as Arthur talking about his beloved daughters in class to his students. Arthur was a gifted scholar and teacher, but also had a special gift of kindness, compassion, and really wanted to help his students succeed in school and in life. Arthur sometimes took an atypical approach at teaching, reaching his students, and getting them to participate. A record player was a must in his classroom. It was not uncommon to listen to ELO, Fleetwood Mac, Kansas, Elton John, just to name a few. How cool for a teacher to let you listen to popular music in school, learn from it, and write about meanings in a song. His students meant the world to him. He swelled with pride when he would talk about accomplishments of his current and former students. He remembered EVERYONE he taught, the year they graduated, what he taught them, who else in their family he had taught, and what they did beyond Carter. He could not go anywhere in Riverside without someone saying excitedly, "Mr. Matchette, so good to see you. Arthur attended Baylor University for his Bachelor's degree and received his Master's degree from UNT. He loved Baylor and always rooted for his Baylor Bears in any sport they played. He was so proud when his daughter, Leah, followed in his footsteps and attended Baylor. Arthur was married to Mary (Trojacek) for 15 years. Beyond the years of marriage, Mary and Arthur remained committed to being the best parents to their daughters, and maintained a strong friendship. Mary and the girls' support provided Arthur the opportunity to remain independent as long as it was possible. He resided down the street rom Carter Riverside and loved being a part of that community. Arthur's family was his priority. He always thought of his family and was always getting "surprises" from the Salvation Army Store. He was good at picking out treasures for his family. Arthur's life will be celebrated at a visitation at Lucas Funeral Home on Sylvania and a small graveside service at Caddo Cemetery in Joshua. He was preceded in death by his father William Hall Matchette, mother, Mary Faye Daly, bonus daddy, Paul A. Daly and a brother, Don Daly. Left to cherish his memory: Leah and Andy Creamer, Julie and Jerry Creamer, Laura and Jeff Payne; grandchildren; grandchildren, Joshua, Shelby, Alex, Erika (Brian), Jessica, Ryan, Katie and Claire; great-grandchildren, Mary, Tinley, Zoey, John and Grace; dear friend and co-parent, Mary Tidwell Matchette Trojacek. In lieu of flowers, Arthur and his girls would be honored by donations to the Carter Riverside Alumni Association, P. O. Box 7005, Fort Worth TX 76111.

William Arthur Matchette, 79, lost his battle to cancer and went to be with Jesus on June 23, 2018. Arthur was born the only child of Mary Faye and William Hall Matchette on October 20, 1938 in Los Angeles, CA. He lived in California until he... View Obituary & Service Information

The family of Mr. William Arthur Matchette created this Life Tributes page to make it easy to share your memories.

William Arthur Matchette, 79, lost his battle to cancer and went...

Send flowers to the Matchette family.