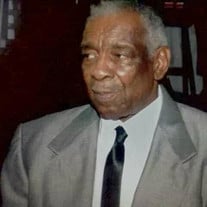 Born, January 15, 1933 in Highbank, TX. He’s the oldest child of Arrington and Detter Ethley. Sonny was his nickname. Sonny only completed school up to the 6th grade but that didn’t stop him. He had to stop going to school to help around the house. At an early age Sonny got married and had five children with his wife Dale Ethley. They would have two boys and three girls. As time passed their unity would be dissolved. Later in life he would meet then Tracy McHenry who had five children of her own. She had one boy and four girls. At the tender age of 29 years old on June 14, 1962 they would get married and together they would have three children; two boys and one girl. Yes! That’s a total of thirteen children. Who does that, today? Sonny was drafted into the army and served two years and later would be in the reserve. He was given his dishonorable discharged for the time he served. Sonny drove semi/18 wheelers trucks for about 65 years; 50 years of his career was done over the road and coast to coast. For 15 years he worked at Tandy Transportation/Radio Shack where he would over the years be awarded trophies for driving an accumulative 2 million miles accident free. That’s Amazing!! Rain, Sleet, or Snow. This was during a time where the drivers drove as much as needed to get to their destination on time. During his free time Sonny enjoyed fishing, listening to his music, and spending time in his yard. He listen to the blues and country music. He was known as the Music Man at Arlington Lake. Majority of the family love the blues because of him. Sonny enjoyed spending time with all his children and grandchildren. Whenever it was possible he wanted to go to the parks or the lakes to celebrate the holidays or any occasion just so he can sit and watch everyone have a good time. One of his favorite holidays was Easter. He would have the adults hide eggs (real ones) a thousand times. During the year Sonny would collect during his travels and save his quarters and dimes that would at the end of the year be used to purchase his family Christmas gifts. There was one Christmas that $700 was collected. He loved Christmas music the most. Sonny was known to mess up everyone’s name. He would always find a nickname for someone to help make it easy to remember who they were. It usually had something to do with where they were from, how they dressed, or the kind of car they drive. It was his signature thing to do. What was your nickname? In 2004 Sonny was diagnosed with early on-set Alzheimer’s it was very difficult for him to hear that news. Later he would make the decision to retire and to never drive again. Easter 2006 Sonny rededicated his life to Christ and joined Ambassadors of Christ Christian Center. June 15, 2018 just after midnight the Lord called Sonny home. He and Tracy were married 56 years June 14, 2018. Look at God! Proceeded in his death: parents; Arrington and Detter Ethley; brother, Kenneth Ethley, sisters, Ruth Cooper and Vera Hamilton; children; Cynthia Ethley, Diane Ethley, Thomas “Bob” Ethley, and LaVonne “Red” Emmitt. Survivors: wife Tracy Ethley, daughters; Marilyn Melton, Janice Cathey (Kevin), Teresa Bedford (Lester), Vickie Hopkins, Larena Payne (Vincent); son; Zelven “Fella” Ethley Jr, Jessie McHenry, Darry Ethley (Melva), Eugene Ethley (Katrina). Sisters; Billie Carol Brookins and Loretta Gilstrap. ~ 38 grandchildren ~ 54 great-grandchildren ~ A host of great-greatgrandchildren, family, and friends. Visitation: Thursday, June 28, 2018, 7PM - 8PM Williams & Lucas Funeral Home Chapel Service: Friday, June 29, 2018, 11:00AM Williams & Lucas Chapel Burial: Friday, June 29, 2018, 2:00PM Dallas-Fort Worth National Cemetery

Born, January 15, 1933 in Highbank, TX. He&#8217;s the oldest child of Arrington and Detter Ethley. Sonny was his nickname. Sonny only completed school up to the 6th grade but that didn&#8217;t stop him. He had to stop going to school to... View Obituary & Service Information

The family of Zelven "Sonny" Ethley Sr. created this Life Tributes page to make it easy to share your memories.

Send flowers to the Ethley family.