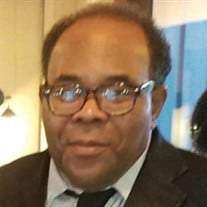 Mr. Cedric Willis Gardner was born to the parentage of Jack and Maxine Gardner on February 10, 1958, in Fort Worth, Texas.

Cedric accepted the Lord at an early age and united with Mt. Pisgah Missionary Baptist Church under the pastoral leadership of Rev. H. R. Bradley. At Mt. Pisgah, Cedric was a faithful member of the Male Chorus and the Willing Servants Sunday School Class.

Cedric was a graduate of Green B. Trimble Technical High School. He later attended Tarrant County College (South Campus) and the University of Texas at Arlington.

For many years he was employed at the National Archives as an archives technician where co-workers describe him as a quiet but likable individual.

Cedric departed this life on February 19, 2021 after a lengthy battle with diabetes.

He was preceded in death by his parents: Jack and Maxine Gardner; Brother, Carl Gardner; Sister, Jacqueline "Jackie" Gardner, and the matriarch of the family, Merelee Adams.

ATTENDANCE AT THE VISITATION AND FUNERAL SERVICE WILL BE LIMITED,

SOCIAL DISTANCING WILL BE PRACTICED AND MASKS MUST BE WORN.

To order memorial trees or send flowers to the family in memory of Cedric Gardner, please visit our flower store.