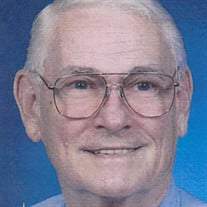 Charles grew up in the Humble Oil Field Camp at Turner Town in East Texas. He left
to serve in the U.S. Navy, and then returned to Texas and in the late ‘50s worked for
Texas Electric, where he met his wife, Doris. In the mid-‘60s, Charles began working
for Harbison-Fischer. Eventually he moved to Alcon Labs and worked there for 25
years before eventually retiring in 1998.
Charles was very active in his church, St. Luke United Methodist, and volunteered
for over 20 years with the Fort Worth Police Department at the North Sector and
through Citizens on Patrol.
He is survived by his wife of 58 years, Doris; his sons Mike and David; his son-in law
John Hayes, and his daughter-in-law Kristin Crocker. He was a wonderful husband
and father.
Donations in Charles’ name can be made to St. Luke United Methodist www. st-luke-
umc.net or Community Hospice of Texas www.chot.org.

To order memorial trees or send flowers to the family in memory of Charles Crocker, please visit our flower store.