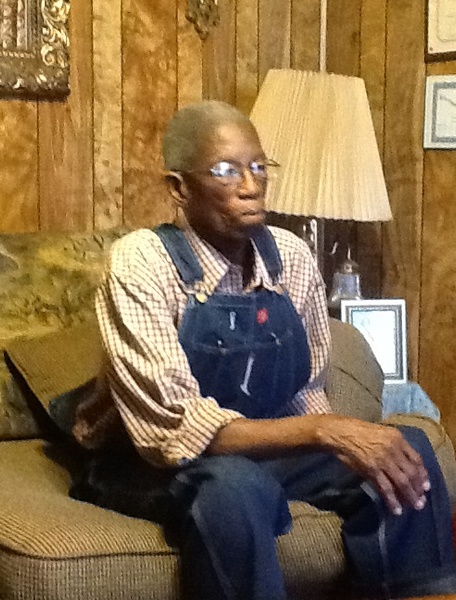 I have worked in the fertile earth and planted a garden,

so I know what faith is.

I have listened to the birds caroling in the morning

and at dusk, so I know what music is.

I have seen the morning without clouds after showers,

so I know what beauty is.

I have sat before a wood fire with old friends, so I

know what companionship is.

I have walked the path of quietness along the forest

floor, so I know what peace is.

I have dwelt in the valley of remembrance on the hills

of home, so I know what love is.

I have seen the miracle of spring, the fruitation of

summer, and the beauty of autumn followed by repose

of winter, so I know what life is.

I have cried unto GOD with my voice and HE gave

ear to me, so I know what prayer is.

And because I have perceived all these things, I know

Phillip Donnell Jr. blessed the union of Phillip and Susie Robinson Donnell Sr. on September 1, 1929 in Streetman of

He professed his belief that Jesus Christ was his Lord and Saviour when he was a youth and was Baptized Into The Fold of Christ.

On January 5, 1951, Phillip enlisted in The United States Army from which he received an honorable discharge December 17, 1953.

In 1953, Phillip made Dallas his home. A year later in 1954, he relocated to Fort Worth where he met Bernice Perkins. They united in holy matrimony July 7, 1960. The couple selected First St. John Baptist Church to be their home. Phillip was the proprietor of an auto and tire shop.

On April 27, 2022, Phillip Donnell Jr, Stepped Into The Light of Eternity.

He is survived by his beloved spouse, Bernice; their 4 children : Calvin, Phyllis, Cecil and Anthony; their grandchildren and a host of extended family members and friends.

To order memorial trees or send flowers to the family in memory of Phillip Donnell Jr., please visit our flower store.
Send a Sympathy Card

Public viewing/Visitation 1PM to 6PM Tuesday in the chapel of the funeral home. Mask or face covering and social distancing will still be observed.

Interment 1:00 PM Thursday, May 12, 2022 in The Dallas/Fort Worth National Cemetery 2000Mountain Creek Parkway Dallas, Texas 75211. Funeral honors under the auspices of The United States Army Detail.