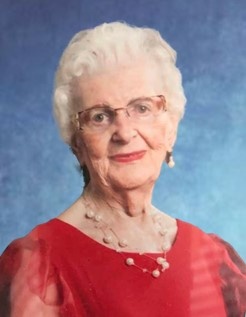 Stephanie Barbara Klarich was born on January 18, 1923 in Meriden, Connecticut to Joseph and Mary Koziol Nowakowski. She was the eighth of twelve children. She married Ernest A. Klarich in 1946 and moved to St. Louis, Missouri before moving to Texas in 1955 to raise their five children.

She was a bus driver for St. George Catholic School and manager for the school cafeteria and later retired from BISD as a bus driver. She was a Lady of Equestrian Order of the Holy Sepulcher of Jerusalem of the Southwestern Lieutenancy. Stephanie lived her life to the fullest and her greatest joys in life were her children, grandchildren, great-grandchildren, and her church. She shared love and laughter with all who knew her. She was loved by anyone who met her.

In lieu of flowers, donations can be made to St. George Catholic Church.

To order memorial trees or send flowers to the family in memory of Stephanie Klarich, please visit our flower store.